Hello Hilary, No sea for holiday this year for me, but typical Troyes city and champagne wineyard! It makes a change but rain and freshness are more present! Anyway it’s very plaisant to discover a new french department. A place to come Bises [kisses] Christine

Troyes looks great in the sunshine on the front of the card, but Christine has not been so lucky with the weather, it seems.

The card is postmarked 28-07-17 when most of northern Europe was suffering a very high rainfall during the, so called, height of the summer!

The stamp is the latest (controversial) version of Marianne.

Another message from Christine, who now regularly sends me cards from her travels 🙂 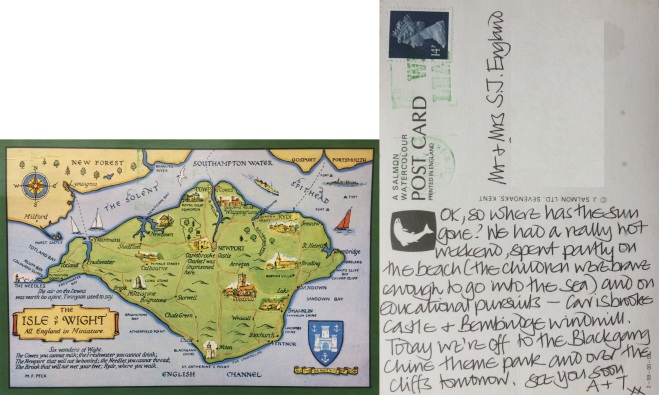 OK, so where has the sun gone? We had a really hot weekend, spent partly on the beach (the children were brave enough to go in the sea) and on educational pursuits – Carrisbooke Castle + Bembridge windmill. Today we’re off to the Blackgang Chine theme park and over the cliffs tomorrow. See you soon A + T xx

One of my favourite types of card – a map showing all the places that are mentioned, plus a great little riddle on the side!

It’s postmarked ‘PORTSMOUTH 30 MAY 1989 ISLE OF WIGHT’ in green ink, which is less common.  The other postmark is partly obscured, possibly it says ‘WE LEAD’, but who or what this refers to is a mystery.

An earlier card from Amanda and Tony.

Hi, Greetings from Devon. The site is well equipped but big (and lots of Sun reader types!). Weather has been good so far (apart from putting the tent up in the rain). Have done some lovely walks and tomorrow is a boat trip up the river Dart.  Hope you’re all well, love John Joanne A & P

With no date and an illegible postmark it’s impossible to say when this card was sent, so I am guessing 2004 or thereabouts.

Torquay is on the South Devon coast and is part of what is known as the ‘English Riviera‘ due to its generally sunny, warm weather, which makes it a very popular holiday destination.

This is a later card from my brother, John, who is enjoying a camping holiday with his wife and children. 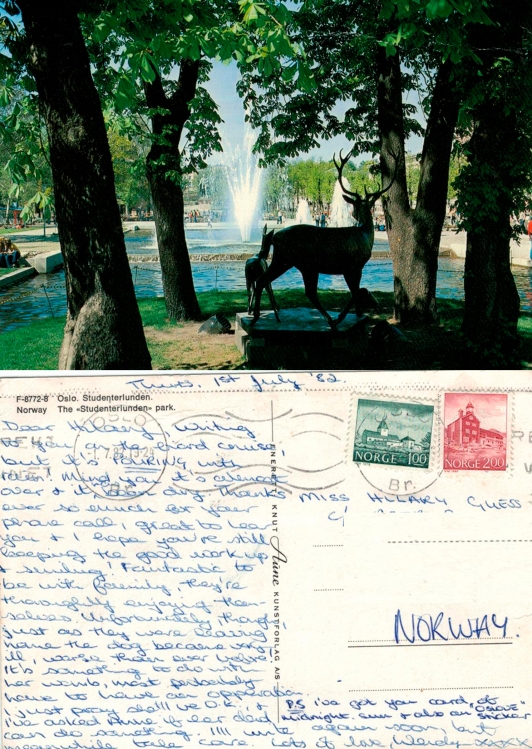 Thurs, 1st July ’82 Dear Hilary, writing to you on the fiord cruise, but it’s pouring with rain! Mind you it’s almost over & it has been dry. Thanks ever so much for your phone call, great to hear you & I hope you’re still keeping the good work up & smiling! Fantastic to be with family, they’re thoroughly enjoying themselves Unfortunately, though, just as they were leaving home the dog became very ill, worse than ever before! It’s something to do with her womb, most probably have to have an opperation. I just pray she’ll be O.K. & I’ve asked Anne if her dad can do something.  I’ll write again soon, but meanwhile take care lots of love, Wendy xxxx P.S I’ve got you card of midnight sun & also an ‘OSLOVE’ sticker

Lots going on here. Wendy’s enjoying a cruise up the fiords, but the dog is poorly and I’m about to receive an ‘OSLOVE‘ sticker!?

Featuring the Studenterlunden Park in Oslo and postmarked Oslo, the card was presumably posted after Wendy had returned from the cruise.

The two stamps are from the definitive series issued between 1977-1983 which illustrate traditional and historic buildings.

Another card from Wendy,  we were both still in Norway, but I had temporarily relocated, with my employers, to their summer holiday home and Wendy addressed the card to me there.  It is not clear whether Wendy was on the cruise with her own family or with the family that she worked for; I suspect it is the former, as she does sound very pleased to be with them.  We were both coming to the end of our contracts and Anne had already left to start her nursing training.  I cannot recall whether I saw Wendy again before leaving Norway, I certainly never received the ‘OSLOVE’ sticker! Although, we exchanged postcards for a few years, I have lost touch with Wendy and have not yet managed to reconnect with her.