Dear Hilary & Simon Quite a nice change Have never been to I.O.W. So glad I am going to be a great, great aunt Love Auntie Laura

The postmark is not clear, however I know that it was 1990 as that is the year our daughter was born.

We do not learn whether Auntie Laura visited Carisbrooke Castle, featured on the front!

A 20p stamp commemorates the Stamp World Exhibition held in London that year.

Hi Hilary! my health continues to decline. i have Achile’s tendonitis that started many months i finally had to get a big boot and go to physical therapy. i put all my art supplies [away] during the holidays [and] desperately wanted to paint, so i started bring stuff up from the garage, yay! as you can tell nothing happens in my life! Love C 1/17

The photo does not do justice to the depth of colour and texture that C has achieved in this hand made card.  She’s mainly used oil pastels on this one, I think, and I love the colour combinations 🙂  You can see more of her work here

It’s a great status update, from earlier this year (2017), about the minutiae of a life that is lived dealing with debilitating health issues,  and food for thought for those of us lucky enough to be currently enjoying good health and a full life – make the most of it and be nice!

C and I have been exchanging postcards for over a year now!  Hers are always her own artwork, while mine to her are a mix of hand made and commercial ones that I pick up when I’m and about and think of her.

Spending a week with a local Probus Group in Sandown for one week.  Excellent hotel & good service.  Quite warm at the moment & air like wine.  Love Auntie Vi

Postmarked ‘Portsmouth & Isle of Wight 9 MAY 1988’ this is another brief status update from (Great) Auntie Vi.  The important things are mentioned, of course; the weather and the quality of the hotel 🙂

I’ve never heard of Probus and, with the ignorance of youth and the lack of Wickipedia back in the day, I probably never bothered to find out about it in 1988!  Auntie Vi was a professional, intelligent woman and always sought out like minded people.

Dear Hilary & Simon, sorry you are not here, skiing and resort are absolutely 1st class, Only bad part so far was a 9 hour coach transfer. chalet idea is really good, food excellent. Andy & Kevin both wish you could have made it, but who knows, next year? Hope things are under control with you. Take care, love John.

Another card from Val d’Isère and John, together with Kevin and Andy, is obviously enjoying the resort.  The text here indicates that we should have been with them on the trip.

The card is postmarked 1991 and carries the 1989 Marianne de Briat definitive stamp.

John is my brother; we learnt to ski as children in the 1970’s with our forward thinking parents, who took us on several package trips to Austria, when ‘winter sports’ holidays were something of a novelty.  Simon and I were due to be on this trip to Val d’Isère, but the UK was in the midst of a recession at the time and our bank manager, more or less, forbade us to go.  We should have ignored him and gone anyway; the end result was the same! 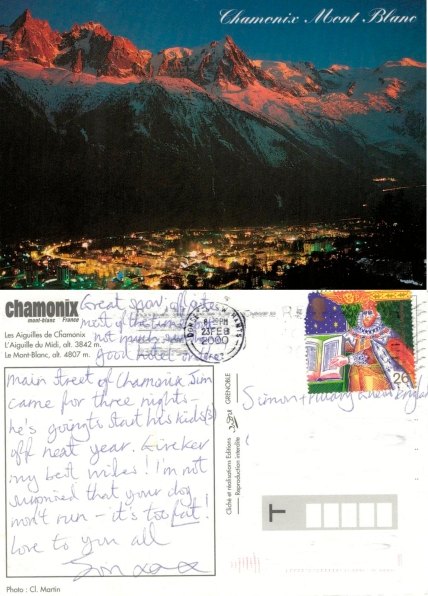 The French like photographing their ski resorts at night, don’t they?  This time it’s Chamonix, which also featured a few weeks ago here.

Despite obviously being written in France, the card was posted in the UK as it is postmarked ‘DORSET & W HANTS 8.30pm 23 FEB 2000’ and carries a 26p first class stamp.

In 1992 we went skiing with Andy and Kev; Jon was staying in the same chalet; we all skied together, exchanged addresses and have been skiing together most years since then. We don’t see much of each other between ski trips, although on this occasion Jon must have recently visited us in order to note our slightly overweight dog!

To Mum + Dad + Jas. Hope you guys are okay, season is passing by pretty quick. Love you all, See you soon Gus x

Post marked 24-02-16, the card carries a 20g stamp, which, as usual, features the symbolic Marianne. This particular Marianne design sparked considerable controversy when it was issued in 2013.

Morzine, featured on the front, is a very popular ski destination, particularly from the UK, as it is only an hour’s drive from Geneva airport.

Gus is our son, who spent the winter in Morzine improving his skiing. Obviously, during that time we were in regular electronic contact, hence the brevity of his message, but it was still exciting to receive this card, which required considerably more thought, time and effort to despatch than a text! We are very proud of Gus 🙂

Having a great time, very hot here, sea not quite rough enough but did surfing yesterday. John has just replaced his rubber dinghy that he wrecked yesterday. The site is lovely, quiet, clean & very convenient & plenty of room (unusual for French sites). We are eating outside all the time, barbecuing & drinking every evening – very relaxing after the activity at home. Love J P R & C

The last sentence says it all – we can picture the evening sun on the caravan site and practically smell the barbecue as we read!

Postmarked ’17 LES MATHES 16h 45 28-7-1988 CHARENTES MARITIME’ the card features a view of Le Pont du Diable au Platin, which is a popular natural feature of Saint-Palais-Sur-Mer on the Atlantic coast of France.

This is another card from J,P,R & C.  John, once again features, as a middle aged man who has ‘wrecked’ his rubber dinghy in the surf!  This comes as no surprise to me – during the 70’s our family and theirs spent many happy holidays in Cornwall; a big feature of these holidays was John and my Dad endlessly pushing us children over the surf in a rubber dinghy and, inevitably, us squealing with laughter as we were tipped out.