6/10/80 Dear Hilary, Just a quickie from me, while on holiday on the Oxford Canals. It is really good fun. We go to all the pubs en route and have had parties on the barge!! The weather has not been brilliant but we enjoying it so that’s all that matters! Today we are at Banbury. It is a really nice country town. I hope you are getting on OK at college. Bye for now Jan xx

A cheery status update from Janet,  who appears to have enjoyed at least two canal holidays in 1980!  As usual she is making the best of things, despite the inclement British weather.

The card is post marked is ‘BANBURY 1.15pm 7 OCT 1980 OXON’ and also carries the old favourite ‘Be properly addressed POSTCODE IT’.

In the UK we all hear about Banbury Cross from a young age thanks to a traditional nursery rhyme – although I suspect few of us have ever visited and some may not even realise the connection!

As I continue this reflection of my life through the postcards I’ve received, I am amazed at just how many messages some people have sent to me – Janet is one of the most prolific correspondents 🙂

Here for a week We are in a rural old fashioned cottage, all mod cons. We are up the little lane by the Rock Inn (top right on this card). Thanks for your letter and trust all goes well for you both My love Auntie Vi

Here’s Great Auntie Vi again; she loved Somerset and visited the county most years. It sounds as though she and her companion are very pleased with their choice of holiday let; character combined with ‘mod cons’ (modern conveniences), presumably a TV and possibly a washing machine!  Although she mentions The Rock House Inn, it is unlikely that Auntie Vi frequented it, being of the generation of ladies that hardly visited pubs, and certainly didn’t enter them unaccompanied by a man!

The top left picture is of ‘The Caravan Club’ park; an interesting choice of subject matter and a handy bit of free advertising for the CC The site still features on the CC website (2016).

Dulverton is mentioned in the Domesday Book so it is full of historical interest.

Auntie Vi would have been in her late seventies at this time, still enjoying a full life, but sadly her health deteriorated a few years later. 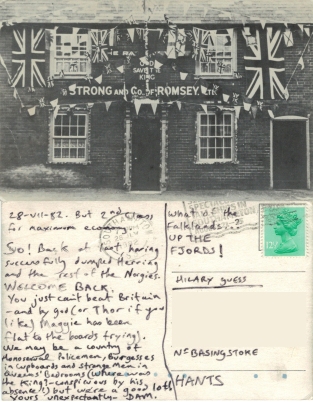 28-VII-82. But 2nd class for maximum economy.  So! Back at last having dumped Herring and the rest of the Norgies.  WELCOME BACK.  You just can’t beat Britain – and by god (or Thor if you like) Maggie has been flat to the boards trying).  We may be a country of Homosexual Policeman, Burgesses in cupboards and strange men in Queens’ Bedrooms (where was the King? – conspicuous by his absence!) but we’re a good lot!  Yours unexpectantly – DAM.  What of the Falklands..? UP THE FJORDS!

The message on the back of this postcard from July 1982 is perhaps more fascinating than the picture of The Railway Inn, Romsey, as so many references to the social history of the time are contained in such a small space.  I had been working as an au pair in Norway (hence the references to herring and fjords) for a year and had been fairly cut off from UK news.

In 1982 the UK was deep in recession and Margaret Thatcher’s policies of shutting down unprofitable national industries and limiting the power of the trades’ unions were very unpopular with many.  However, the invasion of the Falkland Islands by Argentina allowed Maggie to demonstrate strong leadership and the UK rallied behind her, putting unemployment and inflation to one side, in favour of supporting ‘our boys’ in the South Atlantic.

In 1982 being openly gay was still something of a controversy and newsworthy – LGBT rights have improved massively in the UK since then.

The reference to ‘Burgesses in cupboards’ remains a mystery…maybe someone else can shed some light?  We were, of course, still at the height of the Cold War.

Michael Fagan somehow managed to get in to the Queen’s bedroom and engage her in conversation.

The postmark is dated 28th July 1982 (same day as the card was written).  The other postmark is inviting us all to Southampton to see the finish of the Tall Ships race between 21st and 25th August 1982

The Railway Inn, Romsey is now a private house, as I believe it probably was in 1982.  I guess this photo dates from VE day?

DAM was at senior school with me.  At some point he left and went away to private boarding school.  He was a loyal letter and postcard writer, very clever and quite quirky.   His name was Dean but his initials were D.A.M. which is how he always signed himself.  We stayed in touch for several years and saw each other a couple of times.  I think he would have liked more from our relationship, but he just didn’t do it for me; although I do recall a drunken snog on one occasion.  We got briefly in touch again about 13 years ago, when the World Wide Web became available to the masses and we all reconnected through a site called ‘Friends Reunited’.  We caught up on 20 years worth of news; he was working in Australia, then… then there’s always a reason why you don’t stay in touch.