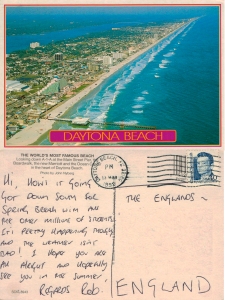 Hi, How’s it going? Got down south for Spring Break with all the other millions of students. It’s pretty happening though and the weather isn’t bad! I hope you are all alright and hopefully see you in the summer. Regards Rob.

Is this ‘The World’s Most Famous Beach’, as is suggested in the description on the back? What about Bondi in Australia?  Maybe in 1992 Daytona was the most famous! Either way, Rob certainly seems quite impressed with it all.

The postmark is sharply legible, ‘DAYTONA BEACH FL 32120 PM 13 MAR 1992’ and the stamp is 40 cents featuring Claire Chennault, part of the Great Americans Series of stamps which were issued between 1980 and 1999.

Rob is my cousin, the only one my mother’s side. He spent several years working, studying and travelling abroad before finally settling on the other side of the world. I cannot recall if we saw him in the summer of ’92 as mentioned in his message; I believe the last time we met was in ’93 at a family wedding. We keep in touch via email, and, excitingly, this summer (2016) Rob and his family are visiting the UK; they plan to stay with us for a few days 🙂

Dear Hiral, I hope this catches you some time before you leave.  Am having a lovely time. Have climbed one of these hills, and been to lots of towns etc. Please send your adress. Love Anne

On the back of the card this view of The Malverns is described as being ‘from the slopes of the Herefordshire Beacon, looking north towards wooded Wynd’s Point and along the outline of the oldest hills in England’

The card is post marked ‘BASINGSTOKE 10 July 1981 HANTS’, which is a considerable distance from The Malverns, so was obviously posted after the visit.  It also carries the familiar ‘Be Properly Addressed POSTCODE IT’ post mark, along with an 11½p stamp – the cost to send a small postcard in 1981

In her message Anne is hopeful that I will receive the card before leaving to start work in Norway. As letters and cards would be my only means of communication it was important to keep friends and family up to date with address changes, hence her request.

This is another of the many cards that I have received from Anne over the years and we remain in touch.

The card features L’église St Maurice in Lille, which, on the reverse of the card, is described as the capital of the north [of France].

See how, as she’s in France, Anne has used the French form of address – M’elle, short for Madamoiselle or ‘Miss’ – that’s a nice touch!

The message gives little away – why was she there in December? Who, if anyone, was she with?

Anne and I chose different routes after college; she continued on to university while I travelled and worked abroad, but we always stayed in touch via letters or cards and continue to do so 🙂