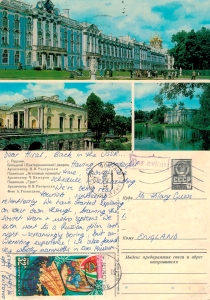 Dear Hiral, Back in the USSR…! Having a wonderful time, though the schedule is exhausting. We’re being real tourists, sightseeing relentlessly. We have started exploring on our own though, braving the soviet tram & metro systems. We even went to a Russian film last night – screamingly boring, but an interesting experience! We also found the woolly mammoths in Zoo Museum – amazing!  Lots of love Anne x

Another card from Anne featuring my nickname from school which endured for several years. ‘Back in the USSR’ refers to an organised college trip we took there in 1980 – it is also a world famous song by The Beatles.

The postmark is Leningrad but the date is not clear. Leningrad reverted back to St Petersburg in 1991

The stamp is large, glorious and of the time, commemorating something that occurred in 1980

The buildings featured are beautiful, I think the top one is the Hermitage – can anyone else identify them? Or translate the descriptions? My Russian is quite limited.

I’m pleased to report that as a result of this blog Anne, Sara and I all met up recently in London. We spent time enjoying Tate Modern, had a meal, some drinks and a great wander down memory lane. Many great (and small) things are forgotten and lost without a trace – they can only be resurrected by reminiscing with those who shared the same experience. 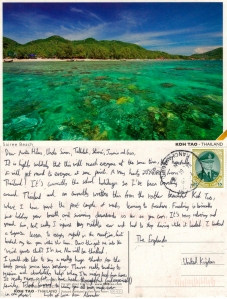 Dear Auntie Hilary, Uncle Simon, Tallulah, Stormé, Jasmin and Gus, It is highly unlikely that this will reach everyone at the same time, but hopefully it will get round to everyone at some point. A very hearty (written in Thai) from Thailand! It’s currently the school holidays so I’ve been travelling around Thailand and am currently writing this from the rather beautiful Koh Tao, where I have spent the past couple of weeks learning to freedive. Freediving is basically just holding your breath and swimming downwards as far as you can. It’s very relaxing and good fun, but sadly I injured my middle ear and had to stop diving while it healed. I booked a trapeze lesson to occupy myself in the meantime, but bashed my toe open within the hour. Does this get me into the ‘weird sports club’? I’m sure Nan will be thrilled. I would also like to say a really huge thanks for the lovely parcels you’ve been sending. They’re really touching to receive and absolutely help when I’m missing food from home. It really means a lot to have such thoughtful (and experienced) family. I look forward to seeing you all soon, maybe even in one place! Lots of love from Alexander

Postmarked 24 04 15 Kanchanaburi this is a fabulously detailed status update from Koh Tao.

Alexander is my nephew – on his gap year, teaching in Thailand for a year. His older cousins (my children) have all travelled and worked abroad. A year is a long time to be away from family, friends and familiar treats, so I make sure I send regular parcels filled with Cadbury’s dairy milk, Cadbury’s mini rolls and Fox’s party rings. I was very pleased to receive this card a couple of weeks ago – we are not FB friends – the descriptive and detailed status update confirms that he is making the most of his time and enjoying new experiences. Alexander is academic and articulate with a gift for languages and I am a proud Auntie. 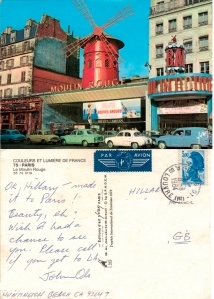 A classic shot of the Moulin Rouge – even for 1984 those cars look old! The view is still much the same, but the cars are more modern (and less colourful) and the building on the left has been painted.  The Moulin Rouge was established in 1889

Like the card from Denmark this card is contains a postal address so that we would be able to stay in touch.

The comment ‘wish I had a chance to see you’ reflects the often held American view that Europe is all one country; London and Paris are a stone’s throw from each other and virtually inter-changeable!  Although London and Paris are very close physically, speak to a native of each and you will soon be clearly apprised of the distinct cultural and language differences between the cities!  Not to mention the English Channel (or La Manche) which separates the two countries.

John O was the friend of Chris – they shared a place together just outside Los Angeles. I first met Chris in 1981 as I travelled to Norway on a ferry from the UK; during the journey Chris and I played cards, he was older than me, and took me under his wing; it was a 24 hour journey and my first time away from home; we exchanged addresses – this being well before the era of mobile phones and the internet. When, in 1982, I visited America with the Canadian boyfriend I contacted Chris and we stayed at his and John’s home in California for a week. John had plans to visit Europe some day – which he did in 1984. I have not seen Chris or John since that week in 1982 and have lost touch with both of them. 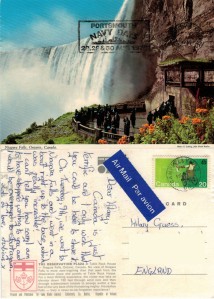 Dear Hilary, Canada is just terrific and I only wish that you could be here to share it. On Tuesday, 9th, we went to Niagara Falls and went in a boat right up to the base, which was really incredible! I can’t tell you how sorry I am to have stopped writing to you and would be overjoyed to start again. Lots of love Julian x

There are two post marks spoiling the picture on the front; one detailing the arrival of the card in the UK ‘Portsmouth & Southsea 21 Aug 1976’ (some five days after leaving Canada) and the other promoting the Portsmouth Navy Days on the Bank Holiday weekend of 28th, 29th & 30th August 1976

The stamp on this card is quite unusual – it is commemorating the Canadian Para Olympics which were held earlier in August 1976 and were the 5th Para Olympics, where amputees and visually impaired athletes competed for the first time.  The only stamp produced by Canada to mark this event was 20 cents and features a mixed-media painting of an archer by Tom Bjarnason.

Julian lived round the corner from the first house I can remember.  Our mums were friends and would often take us to the park. When we moved back to the area the friendship was rekindled. Julian went away to boarding school and we would write to each other regularly. Being fickle teenagers, sometimes we were romantic, other times each of us pursued love interests elsewhere. The wording on this card suggests it was sent to re-ignite romance! I have lost touch with Julian, but our mums are still in touch. I was lucky enough to see Niagara Falls when I was visiting the Canadian boyfriend some years later.