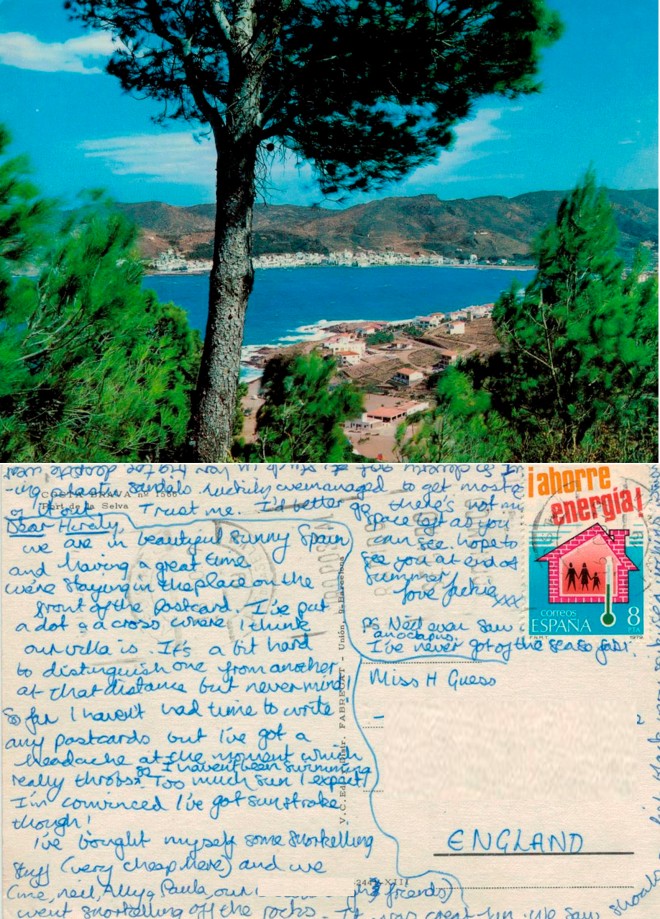 Dear Hiraly, we are in beautiful sunny Spain and having a great time. We’re staying in the place on the front of the postcard. I’ve put a dot & a cross where I think our villa is. It’s a bit hard to distinguish one from another at that distance but never mind! So far I haven’t had time to write postcards but I’ve got a headache at the moment which really throbs so I haven’t been swimming. Too much sun I expect! I’m convinced I’ve got sunstroke though! I’ve bought myself some snorkelling stuff (very cheap here) and we (me, Neil, Ally, Paula, our friends) went snorkelling off the rocks. It was great fun. We saw shoals of fish, black very spiky sea urchins which I so cleverly got stuck in her big toe despite wearing plastic sandals. Luckily we managed to get most of it out. Trust me. I’d better go there’s not much space left as you can see. Hope to see you at end of summer love Jackie xxx PS Neil saw an octopus. I’ve never got of the sea so fast.

Another card from Jackie with her distinctive method of writing all around the edge and back across the top! Despite feeling under the weather she’s managed to pack a lot of news and anecdotes into the space.  The cross she refers to is just visible to the right of the trunk and on the wooded area in the distance; the dot is just below it.

The postmark date is 16 06 1979 and the stamp is one of a set of three encouraging us all to save energy.

Porta de la Selva is featured on the front and still looks much the same although that tree might have gone now!

Jackie was seemingly quite a prolific card writer and enjoyed many holidays with her family.