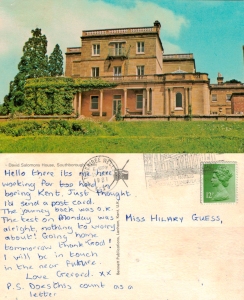 Hello there its me here working far too hard in boring Kent. Just thought I’d send a post card. The journey back was o.k. The test on Monday was alright, nothing to worry about! Going home tomorrow thank God! I will be in touch in the near future.  Love Gerard. xx P.S. Does this count as a letter

Similar to the other card from Southborough this one is dated earlier the same year, carrying the postmark ‘TUNBRIDGE WELLS 6.45pm 15 JAN 1981 KENT’ together with the detailed Pantiles postmark.

This card again features David Salomon‘s house, which in the 1980’s was a regional conference and training centre.

Since I’ve got several cards featuring this building I’m assuming that Gerard was based there for some reason. The text suggests that he’d been to visit me and this must have been the final time that we met, although correspondence continued for several more years. To date I have not managed to reconnect with Gerard…